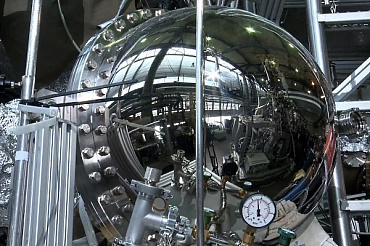 Proton cancer therapy in Germany has become widely available since 1998, when the Helmholtz Center in Berlin (HZB) first opened the doors to patients.

Proton therapy (PT) is an innovative and highly effective form of irradiation that significantly improves the results of cancer treatment.

Since the discovery of the first particles accelerators in the late 1960s, only 70,000 patients have been able to receive this innovative treatment worldwide.

This is critically low number.

Today, 1 out of 3 people in developed countries will be diagnosed with cancer at some point in their lives. More than 450,000 cases of this disease are recorded in Germany every year.

Proton therapy is very useful in some clinical situations, although it is not a magic bullet. For example, in the United States, even with significant development of this technology, about 60% of patients receive PT in combination with other methods, such as surgery or chemo.

For many years, high-precision computer techniques, such as IMRT, Rapid Arc, or CyberKnife remained the “gold standard” of radiation therapy. But now Germany is going to replace obsolete techniques with a much more accurate proton cancer therapy. The feasibility of this approach is confirmed by statistics. Despite the relatively high cost, PT provides much higher survival rate in some groups, especially with inoperable tumors.

German oncology scientists claim that PT increases the chances of recovery from head and neck tumors, liver and lung cancer, and malignant tumors of the pelvic organs and prostate cancer.

The approximate cost of proton therapy in Germany is 40-60 thousand euros.


The physical principles of proton therapy

This method is based on three-dimensional targeted irradiation. Protons are accelerated to 60% of the light speed, bombarding a tumor at a depth of up to 38 cantimeters of the patient’s body. Due to physical features, accelerated particles release only a small fraction of their energy on the surface, focusing on the malignancy.


A sharp increase in energy at the end of the path (known as the Bragg peak) compared with ionizing radiation explains the PT's advantages in treating deeper solid tumors. X-rays affect the tumor at the very surface, while accelerated particles emit maximum energy at the target depth.

The table with the patient can move in all directions, while high precision computer control guarantees high accuracy with less than 1 millimeter deviations. 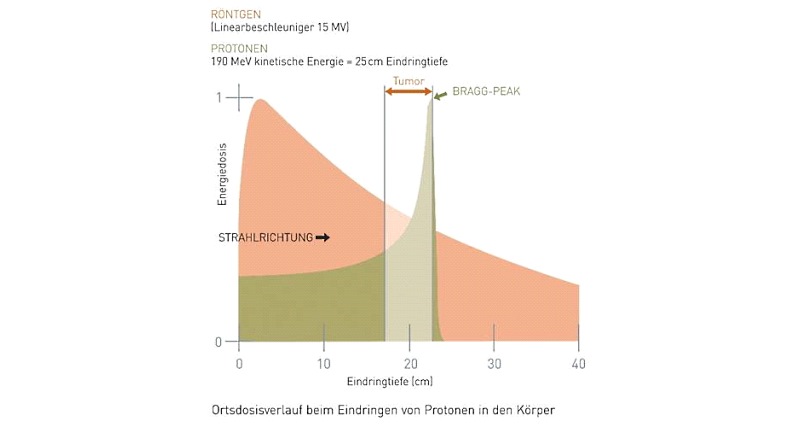 The main advantage of PT is the preservation of vital internal organs. The potential risk to the patient is reduced several times compared with conventional cancer radiotherapy. Low radiation exposure allows increasing doses focused on the tumor. Thus, the chances for a cancer cure are increasing.

Possible side effects of PT include:

German doctors can prevent most of the undesirable effects due to careful planning of therapy and modern protocols. The risk of cancer recurring after a properly performed PT is minimal.


What cancers can be treated by proton therapy?

According to international recommendations, head and neck tumors respond well to PT. For these patients, proton therapy is 4-5 times safer than conventional treatment. Other key indications for proton therapy are basal brain tumors located in tissues sensitive to radiation. High accuracy allows killing cancer without damaging the brain.

PT is used in the treatment of lung, thyroid and liver tumors, abdominal neoplasms and pelvic organs. Sometimes this is the only possible treatment to reduce localized inoperable tumors or metastases in vital organs.


What tumors are not treated by proton therapy?

Рroton therapy cannot be used in the treatment of hematological cancer (lymphoma, leukemia, multiple myeloma) or tumors spreading over a large area (for example, in the bone marrow).

Postoperative irradiation of the breast with protons is currently impossible due to the lack of accuracy of the daily procedures. But European scientists are working on a concept for laser surfaces to provide patients with breast cancer PT in the future.

This is critical for the quality of life and well-being of millions of women.

Proton therapy is no longer an experimental treatment and is officially recognized in the United States and Europe. Unfortunately, today there are not enough specialized proton cancer therapy centers in the world that offer high-quality treatment.

There are six PT clinical centers in Germany:

As you see, proton cancer therapy in Germany is on the rise. Promising technology is becoming increasingly popular, so with the construction of new PT centers our list will be updated.