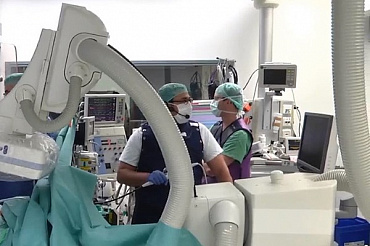 Lung cancer is the third most common malignant tumor in Germany.

The unfavorable prognosis makes it the leading cause of death among men (24%) and the second cause among women (15%).

Early detection of lung cancer is very rare, because the disease does not usually manifest itself, and effective screening programs are not available today.


How is lung cancer diagnosed in Germany?

At the very beginning, the tumor can manifest itself in small round or oval changes of tissue (“shadow on the lung”), which are visible to an experienced doctor on an x-ray. The better the resolution of the equipment, the higher the chance of early detection of cancer. But focal shadows do not necessarily mean bronchogenic carcinoma. Other causes, such as pneumonia, tuberculosis or an autoimmune process, should also be excluded.

"Shadow on the lung" sounds scary for patients and requires careful examination, but in most cases it is not cancer. Typical causes include bacterial infections, connective tissue diseases, parasites (echinococcus), fungus, and benign tumors.

To find out how dangerous suspicious tissue is, German doctors recommend another procedure - bronchoscopy. In general, the probability of detecting a malignant tumor in such cases is 40-50%.

This is not a sentence, but requires attention. According to a recent study by the University Hospital Heidelberg, 51% of the 1,470 surgically removed lung tumors were malignant.

The German Association of Pneumological Clinics (VPK) claims that the chances of a complete cure for lung cancer increase dramatically with early diagnosis. Therefore, patients should not doubt the need for bronchoscopic examination - their lives depend on it. The risk of malignancy is significantly higher among heavy smokers than among non-smokers. An additional risk factor is the appearance of a round mass with irregular margins.


Older x-rays are also useful in the diagnosis. According to German experts, the round mass, which has not changed its shape and size over the previous 2-3 years, is almost certainly benign.

Bronchoscopy is considered one of the most important diagnostic procedures. Using a bronchoscope - a flexible tube with a camera - the doctor can exam the bronchi and their branches, collecting tissue samples directly from the tumor or from enlarged lymph nodes. Only after imaging the tissues and analyzing the samples taken, the doctor can be sure what the tumor is and how much the disease has spread. DKFZ Cancer Information Service states that thanks to modern technology, this examination is no more painful than blood sampling.


When is minimal invasive surgery possible?

For a long time, doctors were skeptical of minimally invasive surgery for bronchogenic carcinoma, even at an early stage. It was doubtful that, due to the limited field of view, the surgeon could not detect and completely remove all affected tissue. Indeed, the camera of the bronchoscope provides limited field of view, but it allows examining tissues with greater magnification and detailing - this is important when removing tumors.

According to Professor Georg Kahler from the University Hospital Mannheim Interdisciplinary Endoscopy Unit, the results of endoscopic removal provide the same results as "open" surgery. In past decades, German surgeons used minimally invasive techniques mainly for colorectal cancer and other tumors, but in recent years, bronchogenic carcinoma has been more and more successfully treated with this method.

The surgical field looks 10 times bigger with the miniature camera, so it became possible to carefully and accurately remove tumor tissue with minimal risk of cancer recurrence. Another advantage of endoscopic surgery is that, due to minimal tissue damage, the patient's immune system is less stressed.

According to studies, this improves the outlook. 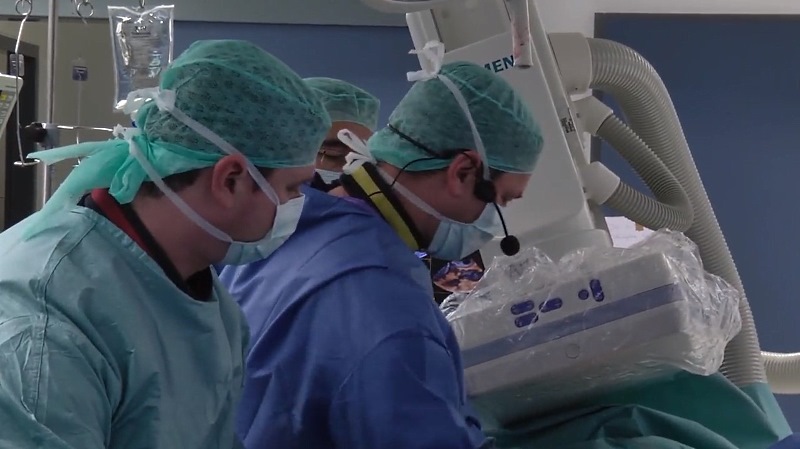 VATS is a video-assisted thoracoscopic surgery used for intervention on the chest organs. Single-port (uniportal) VATS means a more sophisticated technique, in which only surgeons use only one incision instead of 2-3 incisions. It was developed in the late 1990s in Japan. Uniportal VATS for lung cancer treatment was introduced in Europe in the early 2000s, first by Italian and Spanish surgeons, and later it was introduced in large German surgical centers.

Charite University Hospital (Berlin) was one of the first to test new procedure.

While working with high-precision instruments, the surgeon controls the movements of his hands with a high-resolution monitor.

Thanks to limiting pain, blood loss, and the risk of surgical complications, patients recover much faster after uniportal VATS. For minimally invasive surgery, the size of the tumor should not exceed 3 cm. In addition, the lymph nodes should not be affected. As a rule, large tumors involving lymph nodes and multiple vessels require “open” surgery. In these cases, the surgeon must open the chest with a retractor to get to the lungs. This is a difficult procedure that requires a long hospital stay.

The cost of minimally invasive lung cancer surgery in Germany starts from 18 thousand euros, depending on the clinical case, the equipment used and the particular clinic.