For inoperable patients with metastatic liver and soft tissue tumors, interstitial laser thermotherapy (LITT) is proposed in some German clinics.

The use of local thermal effects in tumor tissue is the basis for innovative, minimally invasive therapeutic procedures for advanced cancer.

The invention of laser-induced interstitial thermotherapy made it possible to deliver powerful laser radiation directly to the tumor cells.

Using miniature applicators, the doctor can heat the tumor and destroy it from the inside.

This experimental method is based on the absorption of laser radiation with a wavelength of 1064 nm, which is delivered through a glass fiber applicator. The source of radiation in clinical practice is usually a laser with yttrium-aluminum garnet crystal with neodymium.

The heat released destroys the tumor, creating a “safety zone” around it. To fully utilize the advantages of technology and minimize side effects, new protocols are being developed.

Before the procedure, doctor must correctly calculate the duration of the session and the power of laser beam. Depending on the size, number and location of the tumors treated, several probes or several treatment cycles may be required.

Few academic centers in Germany, including Charite Hospital (Berlin) and University Hospital Frankfurt, are actively developing new LITT protocols. These protocols are adapted to a specific disease. In clinical practice, tissue temperatures in the range of 60-110 ° C are achieved.


Indications for laser thermotherapy in Germany

The only way to completely cure cancer is by surgical removal of the tumor.

However, any surgery is associated with complications and risks for the patient, so German scientists have developed minimally invasive alternative technologies, including RFITT (radio frequency ablation) and MFH (magnetic fluid hyperthermia). They offer inoperable patients unique advantages with comparable prognosis and reusability.

The LITT procedure has been used in Germany since early 1990s, when encouraging results of large preclinical studies were obtained. MRI-guided laser thermotherapy successfully deals with clearly localized tumors of different types.

It has been clinically proven that local removal / destruction of liver and lung metastases prolongs patient survival and is the preferred method for patients who do not undergo surgery.


Indications for LITT include:

Interstitial laser thermotherapy has a low risk of complications due to high-tech monitoring.

The method is sometimes used before surgery to increase the chances of success. LITT complications, such as bleeding or infection, are less common compared with surgery.

How laser thermotherapy is performed?

Any complex medical procedure requires careful planning. To determine whether interstitial laser thermotherapy can be performed, MRI with contrast media (Magnevist), coagulation tests and tumor marker tests are usually performed. If laser therapy is indicated in your clinical case, then the patient’s informed consent for recommended experimental treatment is taken. 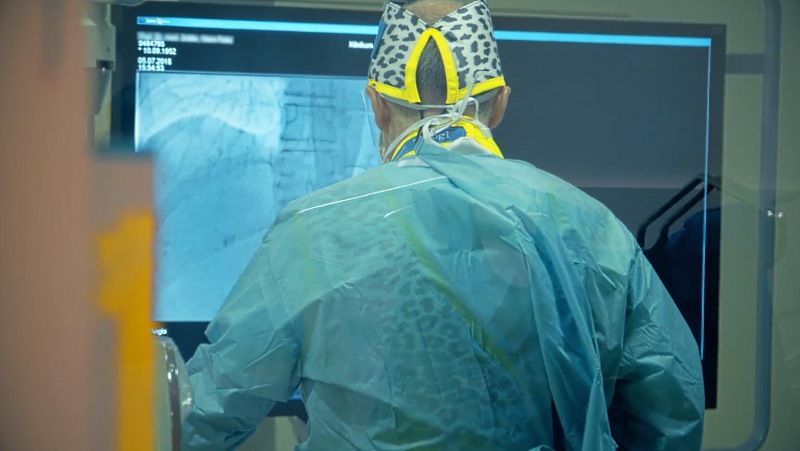 To start treatment, it is necessary to place one or more laser systems in the tumor.

This is usually done under CT guidance to bring the applicators as closely as possible to the affected tissue. Extremely rarely, the preparation is performed under ultrasound guidance.

Before the irradiation procedure, the patient is injected with a local anesthetic in the abdominal area. Irradiation is performed under MRI guidance in order to protect vital structures. Immediately after the session of laser therapy, the results are monitored using magnetic resonance imaging with contrast enhancement.

The cost of the procedure varies greatly from case to case.

The leading expert center of interstitial laser thermotherapy in Germany is the University Hospital Frankfurt. The procedure is also available in a few other clinics, including the Northwest Hospital in Frankfurt and Charité Hospital in Berlin (Virchow-Klinikum an der Charité).