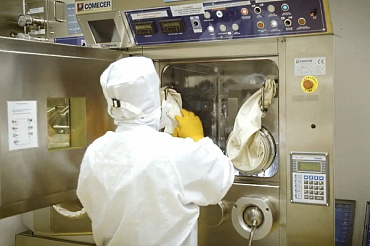 Neoplasms arising from the transition from the esophagus into the stomach, also referred to as esophageal cancer.

Depending on the tissue in which the tumor occurs, there are two main forms of esophageal cancer: squamous cell carcinoma and adenocarcinoma.

So-called squamous cell carcinomas develop in the upper layer of the esophageal mucosa, which is also referred to as squamous epithelium. They account for less than half of all esophageal tumors and can occur along the entire esophagus, including the neck.

Most squamous cell carcinomas are located in the upper and middle thirds of the esophagus.

The adenocarcinomas originating from glandular mucosal cells are found mainly in the lower third of the esophagus and in the transition to the stomach. Also, adenocarcinomas near the stomach opening (so-called cardiac carcinomas) are now classified by German doctors as esophageal carcinomas.

Esophageal cancer is a relatively rare tumor in Germany. Every year, this disease is diagnosed in 5,000 men and 1,500 women. This corresponds to 2-3% of all malignant tumors in men and about 1% in women.

For comparison, breast cancer is diagnosed in 71,000 women annually, and colorectal cancer affects 34,000 men and 28,000 women each year.

The average age of onset is 67 years for men and 71 years for women.

Esophageal cancer is often detected only at a late stage. The prospects for complete recovery in this case are unfavorable.

The causes of esophageal cancer are not yet clear. However, German oncologists are aware of some factors that increase the risk of disease. The most important risk factors are smoking and drinking. These factors play an important role, in particular, in the development of squamous cell carcinoma.

Other risk factors include an unbalanced diet with an inadequate amount of fruits and vegetables, and possibly frequent consumption of hot foods and drinks.

An important risk factor is also frequent reflux of gastric and bile acids from the stomach to the esophagus, which is not necessarily associated with heartburn.

Chronic acid reflux contributes to the development of Barrett's esophagus. This is a pathological change that is considered a precursor of esophageal cancer (adenocarcinoma).

The most common sign of esophageal cancer is difficulty in swallowing. The cause of dysphagia in the narrowing of the esophageal lumen due to the growing neoplasm.

The following additional symptoms or complaints may be a sign of esophageal cancer:

If you observe these symptoms, it does not mean that you have a tumor.

All of these complaints may have other reasons. However, you should be serious about unusual changes and find out the reason.

Permanent dysphagia is a serious symptom and requires the consultation with a specialist.

It is important to listen to the warning signals of your body, as there is no simple test for the early detection of this type of cancer.

An early diagnosis is vital for a successful treatment of the disease.

If esophageal cancer is detected at an early stage, ie as long as it is still confined to the mucous membrane, the tumor can be removed by surgery and the disease can be cured. Unfortunately, in many patients, at the time of diagnosis, cancer progressed so far that complete cure is hardly possible.

But even when the disease is neglected, rapid diagnosis can significantly increase the chances of survival and the quality of the remaining life.


Diagnosis of esophageal cancer in Germany

If esophageal cancer is suspected, German doctors can use modern imaging techniques and laboratory tests to confirm the diagnosis.

The purpose of diagnosis is to determine whether it is really a malignant tumor, and, if so, to determine the location of the tumor and the stage of the disease.

Key methods for the diagnosis of esophageal cancer are:

If cancer is confirmed, further tests will follow. They must show how far the tumor has spread, whether lymph nodes have been affected or whether secondary tumors (metastases) have formed in other parts of the body.

Other diagnostic methods include:

Under certain circumstances, visualization of the trachea and bronchi (bronchoscopy) or abdominal organs (laparoscopy) may be required.


All examinations are used to determine the best treatment concept for each case.

In the case of localized tumors, the concept of treating a patient is determined by consulting specialists from several fields of medicine. When all examinations are completed, the physician and patient must agree on the proposed methods.


The cost of diagnosis of esophageal cancer in Germany:

After confirming the diagnosis of esophageal cancer and determining the type of tumor and the stage of disease, the doctor, together with the patient, will choose the best treatment option.

Treatment that can be prescribed for esophageal cancer:

The choice of therapy in a particular case depends on how far the disease progressed at the time of diagnosis. The age of the patient and the presence of other diseases are also taken into account.

A key part of the treatment is surgery. The purpose of the operation is to completely remove the tumor and surrounding tissues affected by cancer cells.

Prior to surgery, chemotherapy or combined radiotherapy (chemoradiotherapy) is often used to reduce the size of the tumor and destroy any scattered cancer cells. Research has shown that this additional neoadjuvant treatment increases the chances of success.

If the tumor is still at an early stage, ie it is limited to the superficial parts of the oesophageal mucosa, it may be possible to remove it endoscopically while preserving the esophagus.

Such treatment has minimal consequences for the patient.

The possibility of excision of the tumor with a border of healthy tissue is decisive for the success. This means that the surgeon removes not only the tumor itself, but also healthy tissue outside of it. 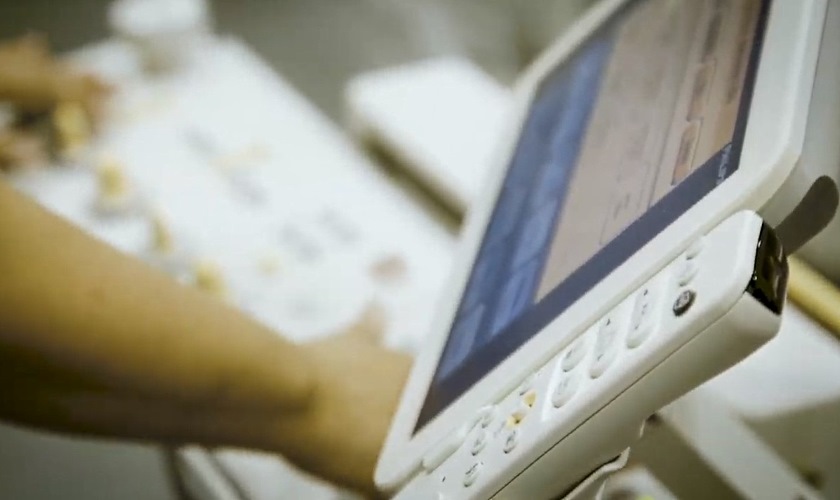 Otherwise, cancer cells remain in the body, which can give rise to a new tumor.

Over the past few years, German surgeons have successfully removed small mucosal tumors with endoscopic procedures.

For this purpose, a probe with an electric knife is inserted into the esophagus. The procedure takes less than 1 hour and is performed through the patient’s mouth, without any incisions.

However, endoscopic procedures are possible only at very early stages of disease, when only the mucous membrane is affected and no lymph node metastases are expected. Unfortunately, this early stage of esophageal cancer is rarely seen in clinical practice.

As with the removal of other organs, the so-called robotic assistes procedures are becoming more common in esophageal surgery in Germany.

This approach reduces the risk of complications and speeds up patient recovery.

During surgery, the lymph nodes surrounding the tumor are always completely removed (lymphadenectomy).

This is performed for safety reasons, as the tumor can spread through the lymphatic system. In addition, microscopic examination of the distant lymph nodes will reveal the true extent of disease. The remaining parts of the esophagus are then connected to the stomach. If gastric tissue is not suitable for replacing the esophagus, a segment of the colon or small intestine is used.

The absence of severe chronic diseases is an important condition for this complex procedure.

If the tumor is no longer limited to the inner layers of the mucous membrane, chemotherapy or chemoradiation therapy is usually carried out before the surgery. This neoadjuvant therapy reduces the size of the tumor and destroys any cancer cells hiding in the body.

After neoadjuvant chemoradiation therapy, the chances of success increase significantly. The cost of such treatment in Germany can exceed $ 10,000, depending on the particular regimen.


Studies have shown that the long-term survival for esophageal cancer improves dramatically with neoadjuvant therapy. German scientists have found that in some cases of squamous cell carcinoma, when chemoradiation therapy works well, cure is possible even without surgery.

Adjuvant chemoradiation may also be performed after surgery. However, an advantage of this treatment is not yet clearly proven and has stronger side effects compared to the neoadjuvant regimen.

If secondary tumors (metastases) have already formed in distant parts of the body, complete cure is no longer possible. The surgery would only serve the purpose of alleviating symptoms, preventing or treating complications.

For example, when the growth of the tumor obstructs the esophagus.

Today, endoscopic procedures are usually used instead of the open surgery for these purposes.

Combined chemoradiation therapy may be prescribed for tumors of the esophagus instead of surgical intervention, if the tumor is considered inoperable.

Also in this case, treatment is aimed at the complete elimination of the tumor and complete cure. However, the chances of recovery in this case are lower than with surgical intervention.

Therefore, depending on the risk, the possibility of chemoradiation therapy without surgical removal of the tumor should be discussed with the patient. 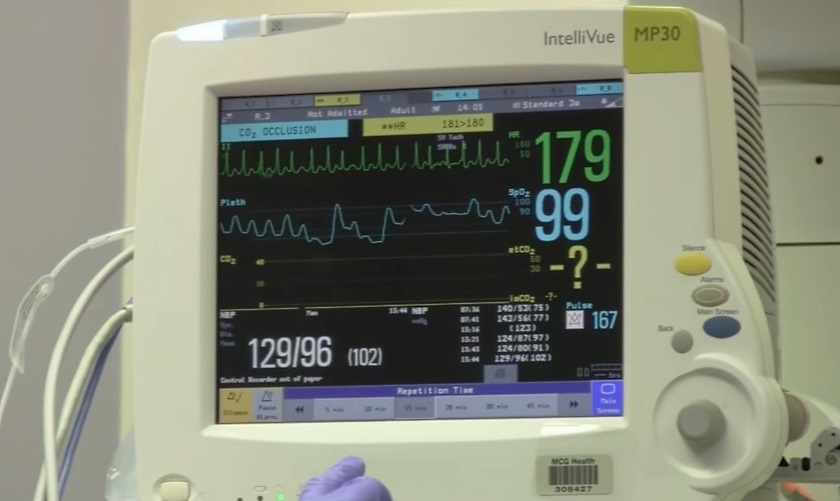 Brachytherapy is sometimes used to reduce the size of a tumor that is compressing the esophagus. Radioactive materials in the form of granules are introduced through small plastic tubes directly into the tumor.

The advantage of this method is that a high dose of radiation can be achieved directly in the tumor, while the neighboring organs are largely protected.

External beam radiation therapy is carried out by courses for several weeks and can usually be performed on an outpatient basis. It is very convenient for patients.


Side effects of radiation therapy

Despite careful planning and high-precision computer technologies, undesirable side effects should be expected during radiation therapy.

They can appear immediately during the course or a few weeks (months) after treatment. Pain during swallowing may further exacerbate existing dysphagia, so the patient may need artificial feeding.

The effectiveness and safety of treatment largely depends on the experience of medical personnel and the technical level of the clinic.

Esophageal cancer chemotherapy is usually used as an additional treatment before surgery.

In stage IV esophageal cancer, when metastases have already formed, chemotherapy is aimed at suppressing tumor growth for a certain time and alleviating symptoms (palliative chemo).


Side effects of chemotherapy

Treatment with cytotoxic drugs affects normal tissues, which quickly regenerate. These are, first of all, the mucous membranes of the stomach and intestines, the hematopoietic system and hair follicles.

Possible side effects of chemotherapy are nausea, vomiting, diarrhea, hair loss, increased susceptibility to infections and a tendency to bleed.

Side effects can be significantly prevented or alleviated with concomitant non-drug measures or medications. Most side effects regress after chemotherapy.

The so-called targeted treatments specifically target the pathological mechanisms that promote the growth of cancer cells.

Targeted agents can be useful even in combination with standard chemotherapy.

Clinical studies show that the targeted drug trastuzumab in combination with cisplatin and fluoropyrimidine can be used to treat esophageal adenocarcinoma with HER2 overexpression.

Today, there is a number of promising studies that can change the esophageal cancer treatment in Germany in the next few years.

To take advantage of the latest innovations, foreign patients can contact the largest academic centers in Germany, such as the Charite Clinic or the University Hospital Heidelberg.